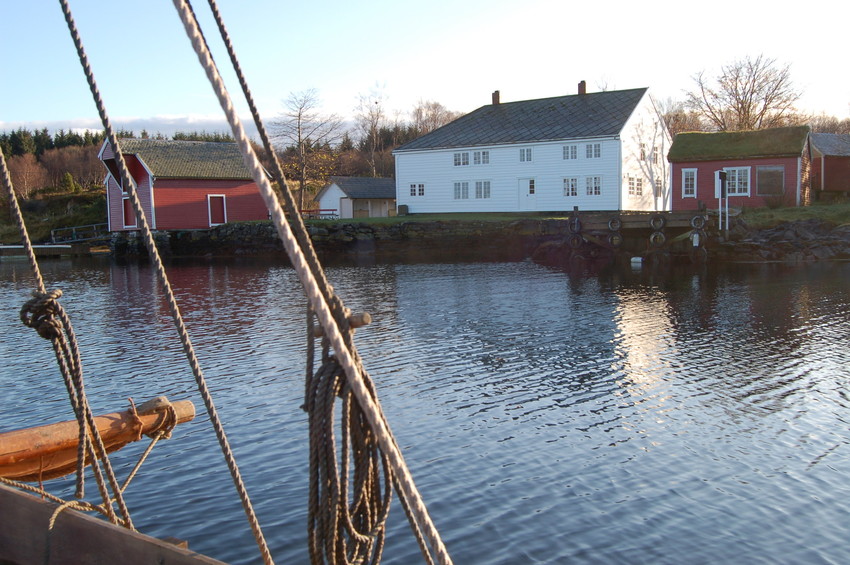 Foto: Håvard Hatløy
The old trading post on the island of Borgarøya is ideally situated, beside a narrow channel sheltered on all sides from the wind and weather. It offers a safe harbour that is easy to use and very accessible from the nearby main shipping fairway. Trading has taken place here since the early 17th century, with an emphasis on fish as the main product to barter. The locals who combined farming and fishing delivered fish and agricultural produce in exchange for a variety of goods in the trading store. Initially it was the powerful merchants in Bergen who ran the business, assisted by their local agents. Later the local traders enjoyed greater independence. In the 18th century Borgarøya was included in the land register as a land clearance area. Much of the land that previously belonged to other farms now became the property of the trading post, meaning that farming was given a more prominent role in addition to fishing, trade, transporting goods and providing accommodation. This variety of sources of income was vital to survival in certain times that fluctuated between stagnation and hectic activity here, there and everywhere. Borgarøya was never ever a goldmine. From the 1880s onwards trade more or less died out as the new trading centre in Ulsteinvik grew steadily in the early 1900s. During World War I, however, things looked up briefly thanks to steam-powered fishing vessels, but this came to an abrupt end in the difficult times after the war…From the 1920s and up until the 1960s the land was farmed, but on an ever-decreasing scale. Ulstein municipality took over the old trading post in 1983, and in various periods has renovated and looked after the buildings and their surroundings. Today the place is a popular resort for day-trippers during the spring and summer.
Publisert av: Lindesnes fyrmuseumSist endret: 2018-11-15