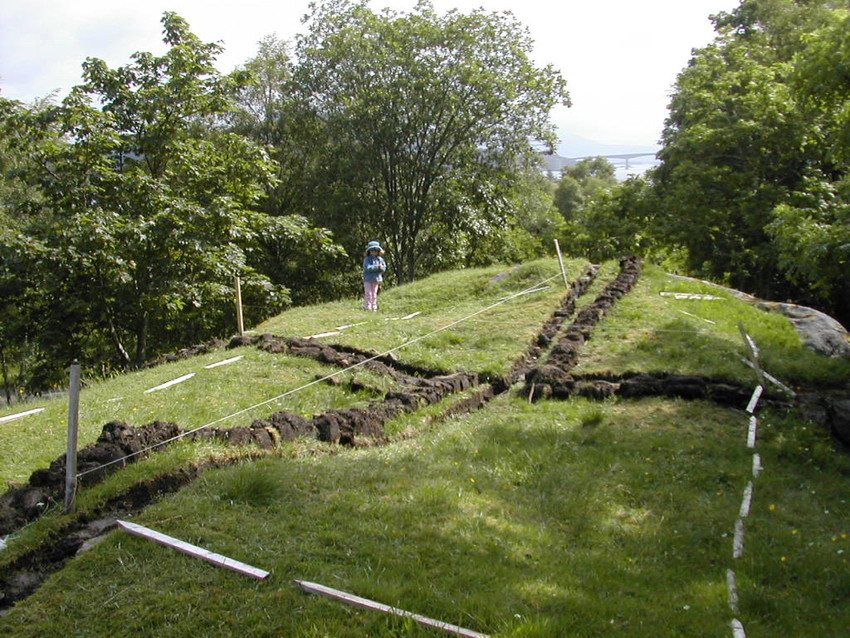 Foto: Håvard Hatløy
Klosterhaugen. Traditionally there has always stood a small monastery on this hillock. The island of Herøy, in Herøy municipality, has a distinct knoll in the centre of the island, providing a good view both north and south across the coastal fairway, which runs close by the island here. The island has played a key role way back in history, probably long before Christianity was established in Norway. Various kings have visited Herøy during the Saga Age, both King Olav Haraldsson (known as St Olav) and King Sverre were here several times. They held assemblies of their personal followers here on a number of occasions. In an outcrop west of the foundations there are two personal insignia hogged into the rock. One wonders who these persons were who took the time, and not least thought it was important to carve their insignia in stone here. What sort of buildings stood on the hillock? Lime mortar in the foundations with fragments of marble, and an ashlar of marble covered with turf, are revealing details. The building was small, about 5 x 8 m, running east/west. A feasting hall is mentioned on Herøy, in connection with archbishop Aslak Bolt’s visitation. Those who have seen Aslak Bolt’s land register have seen an insignia on the leather cover, which is said to closely resemble one of the insignia carved into the rock at Klosterhaugen. Is this a coincidence, or might it be that Aslak carved his insignia here during his visitation? A fascinating thought!
Publisert av: Lindesnes fyrmuseumSist endret: 2018-11-15