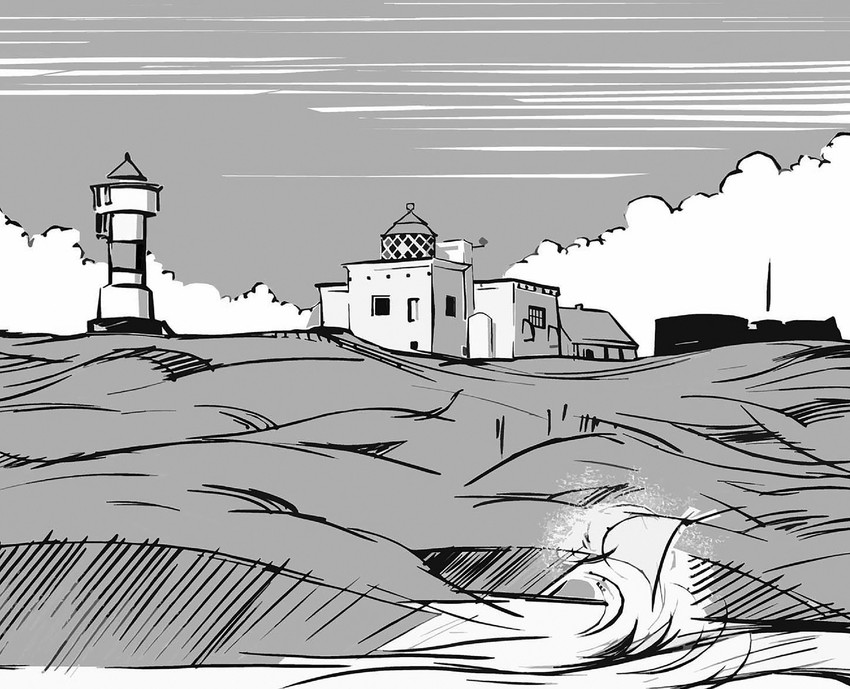 Foto: og grafikk Arild Fredriksen
The name of the island is Hellersøya. Before the lighthouse came, the grazing rights and the rights to salmon fishing were divided between many farms on the mainland. The lighthouse authorities’ demand to take over the whole island, and not just a site for the lighthouse was met with strong protests, and with a governmental expropriation. Hellersøy was also an important nesting ground for many different seabirds, and today the whole island is protected as a bird sanctuary, and access beyond the paved path from the landing to the lighthouse is restricted in the nesting season (15.04-15.07). The Lighthousestation is owned by the government, but today, the today the state cooperates with the local heritage organisation, Friends of Songvår, that is responsible for maintenance and alternative use.

Guiding the way
Songvår lighthouse was established in 1888, as a direct consequence of the steam-whaler “Vardøhus” being wrecked just a few kilometres to the west the year before. 46 lives were lost in the tragedy and only two were saved. Songvår was equipped with a 3rd order lens, and the main purpose of the sector light is to help passing ships to stay clear of the many rocks and islets between the coastal lights at Oksøy and Ryvingen. Later, a beacon has also been placed at Ballastskjærene to the west, to further secure the passage.

Life at Songvår The first lighthouse at Songvår was a simple, wooden house with a lantern attached to one corner, to fit “one keeper and his household”. There was also an outhouse, an oil-shed and a small boathouse with a slipway. The first keeper managed to feed a cow on the island, in addition to some sheep and hens. From the start the children had to attend school in Ny-Hellesund with board and lodging there, but after some years a governess was employed for the children on the island. In 1901 an assistant keeper was employed, but the assistant had to live with the keeper and his family until a new house was built I 1938. In 1955 Songvår became a turn-station, with the keepers working shifts, and the old keeper’s cottage was sold and torn down. When the new lighthouse was built in 1950, the old 3rd order lens was moved over. In addition, a new diaphone fog-signal was installed. The well-proportioned, concrete building was drawn by the famous Norwegian architects Blakstad and Munthe- Kaas, who also were commissioned to re-build most of the lighthouses in Finnmark that were destroyed during the war. Songvår is almost identical to Bøkfjord, the northernmost lighthouse in Norway. The station was automated and de-manned in 1987.