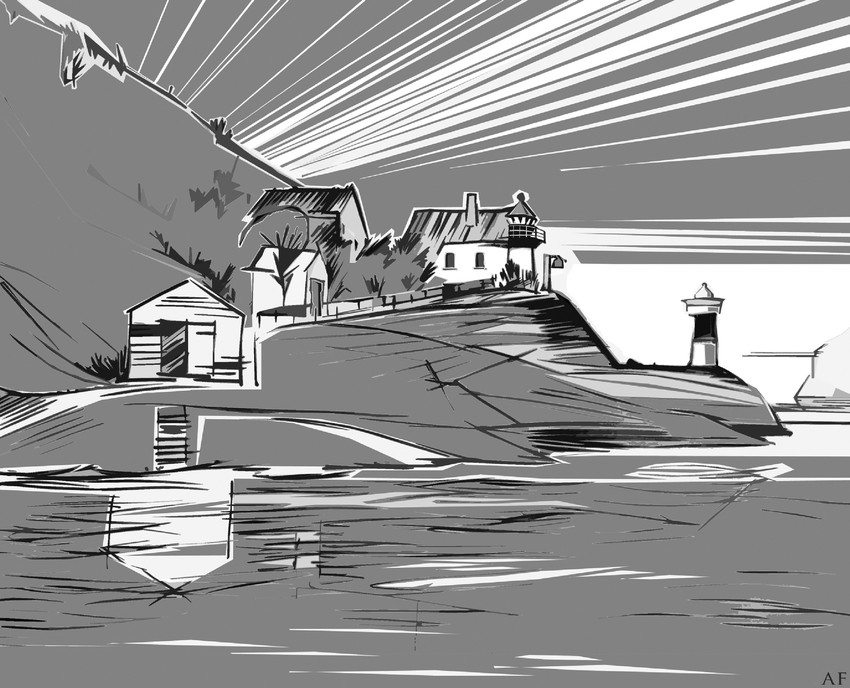 Foto: Jan-Robert Jore
Odderøya and Oksøy lighthouses were both established in 1832. In 1874 the station was moved higher up and rebuilt where it now stands, to make it easier to separate the light from other lights in town. For the same reason, the character was changed several times. In 1896 Odderøya was equipped with a fog-bell, and in 1914 a new lantern was installed. The station was electrified in 1932, and five years later an assistant was engaged. At the same time, a radio beacon was erected. During World War 2, the station was taken over by the Germans. During the five year occupation, the keeper and his assistant still looked after the light, but the Germans decided when the light should be in operation. Odderøya lighthouse was automated and de-manned in 1984, when the light was moved out into the fiberglass beacon closer to the water. The radio-beacon was taken down and the fog-bell deactivated. In 2005 the whole station was taken over from the State by the County Municipality of Vest-Agder, and today it is the Vest-Agder Museum, in cooperation with voluntary interests that are responsible for the activities at the premises, except the tower with the light.

Guiding the way The need to safeguard the entrance to the important harbor of Kristiansand was given the highest priority by the first Norwegian lighthouse commission in 1830. As a direct consequence, the coastal light at Oksøy and the harbour light at Odderøya were established in 1832. After several accidents in the dangerous waters on the eastern side of the Kristiansand Fjord, it was decided to build a third lighthouse at the small islet of Grønningen. Later the entrance was further secured with a secondary light at Oksøy and a light beacon at Kinn. Together, the three lighthouses in Kristiansand are representative of the national lighthouse history both in an architectural and functional sense. The coastal light at Oksøy, with its 36 meters high cast iron tower, the concrete fortress at Grønningen marking the fairway into the fjord, and harbour light at Odderøya, with its small, wooden house, built for just one keeper and his family.

Life at Odderøya At first, the lighthouse at Odderøya only consisted of a small, wooden house (35 sqm) with a primitive beacon attached, fit for “a solitary pair”. The keeper at Odderøya was subjected to the manager at Oksøy, and he had strict instructions regarding his duties. In addition to all the practical work, detailed journals should be kept of all his spending. Both routines and irregularities should be reported. It was more than one man could handle, implying that the keeper had to rely on his wife (and possible children) to full-fill his duties. Although Odderøya is close to town, it was not always easy for the residents to get to and fro. Boat was the easiest, but the landing was exposed, both to bad weather and passing ships. The only alternative was to climb the steep hill and walk through the military quarters of the island.