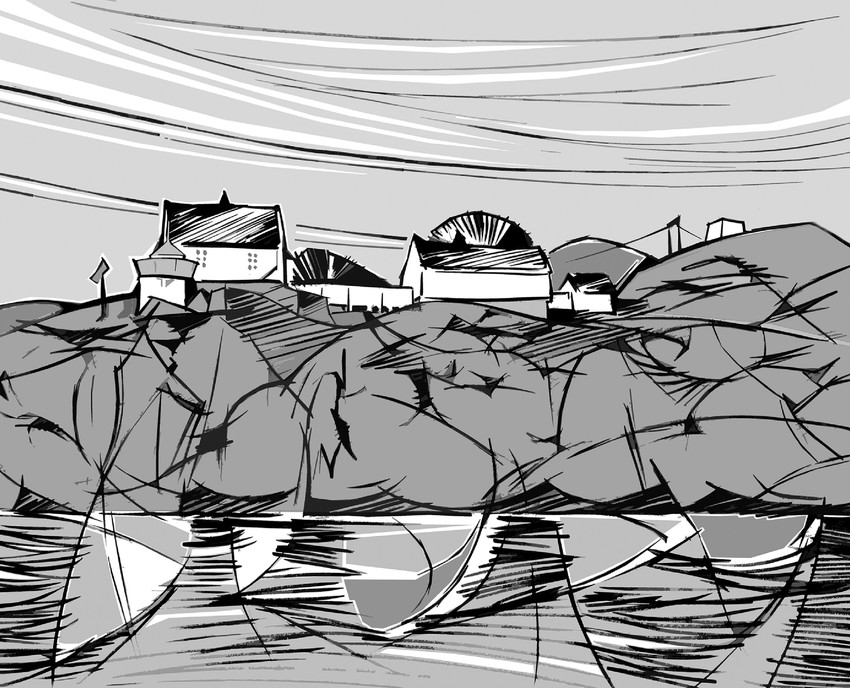 Foto: og grafikk Arild Fredriksen
Hatholmen lighthouse was established together with the coastal light at Ryvingen in 1867. Unlike to many other stations, Hatholmen has largely been preserved in its original form. It is a typical one-family station, with the lantern attached to the dwelling. The whole island, with its buildings and remains of cultivated landscape is protected as a national monument under the Cultural Heritage Act. Hatholmen is also part of the protected coastal landscape between Kristiansand and Mandal. The island and the lighthouse are owned by the government, who cooperetes with the voluntary “Mandal Kystlag”. They are responsible for maintenance and alternative use of the premises.

Guiding the way
The coastal light at Ryvingen was established to give the ships a safe landfall outside the historically important harbours around Mandal - Risøbank, Kleven and Skjærnøsund. The light at Hatholmen should secure a safe entrance to the Mannefjord, and together with the beacon “Grandma” at Sjøsanden, and the lights at the river mouth, Hatholmen helps guide the way to the centre up river. But Mandal’s main port is still Kleven and Gismerøya.

Hatholmen lighthouse was built for “one keeper and his household”. It was classified as a rather “easy” station compared to some of the more isolated lighthouses on the coast. Here you could support your household with some gardening in addition to the “riches from the sea”. But although it was only the keeper who was on the pay-roll, the management of the station depended on the whole household taking part in the daily work routines. The steep and narrow pathway from the harbour to the house was a problem when heavy loads should be moved. Therefore, a funicular, drive by a petrol engine, was constructed. The engine was placed in the small “house” on top of the island. When the wick-burner was replaced by an acètylen gas-burner in 1931, it was no longer neccesary to keep a night-watch, and life at the station became a little easier. The station was automated and de-manned in 1973, and today the beacon is powered by solar energy.

From landscape painting to lighthouse keeping

The first keeper at Hatholmen was Tobias Olsen Rølland. He came from Brekkestø in Aust-Agder, where he had worked several years for the harbor authorities with the maintenance of mooring-rings. This also involved the re- painting of the black and white mooring-symbols on the rocks. The profession earned him the title of “Tobias, the landscape-painter”. He spent the last 17 years of his professional life as a keeper at Hatholmen.