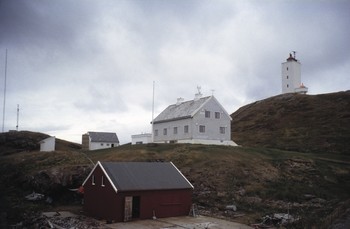 Foto: Riksantikvaren
Fruholmen is the world’s northernmost lighthouse station. The original cast iron tower was erected in 1864-66 and lit on Aug. 25th 1866. The lamp in the 33 meters high tower ran on blubber oil the first years, paraffin was introduced in 1875. As the only lighthouse in Finnmark, Fruholmen was not occupied by German forces during the Second World War. Nonetheless, the lighthouse keeper and his family were forced to evacuate in November -44, whereupon the lighthouse was bombed and completely demolished. A new concrete tower was erected after the war and lit for the first time in 1949. Fruholmen was automated and de-manned in 2006, and is today protected by the cultural heritage act.