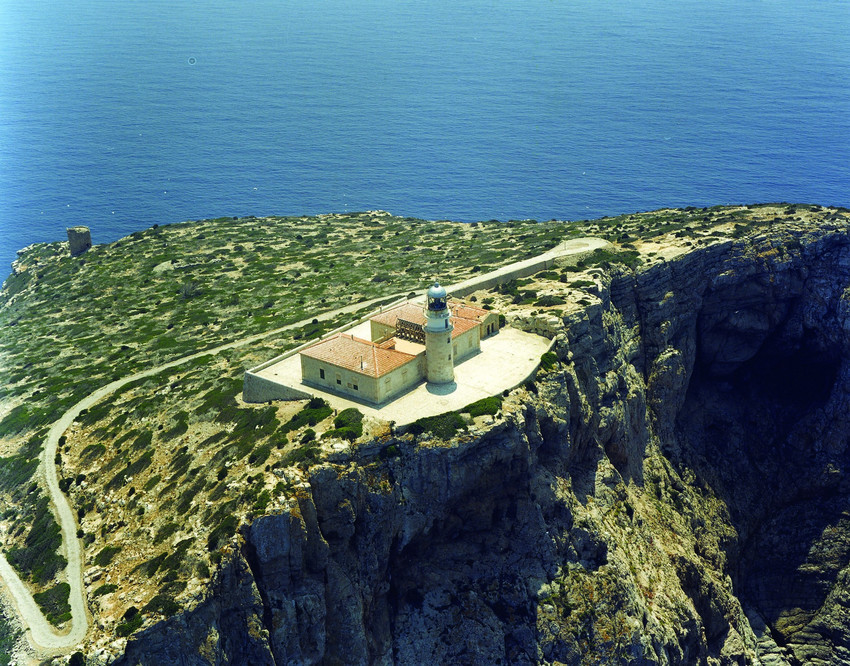 Was designed by Eusebi Estada. It was opened on November 15, 1910. This is one of the lighthouses on Dragonera Island that substituted the lighthouse at Na Pòpia, situated on the highest peak of the island. It originally produced a light pattern consisting of isolated flashes every 7 seconds through the use of mercury flotation tanks, allowing the lens to rotate at a greater speed. This was of great importance for the signalling on the island given that the old lighthouse at Na Popia emitted a light pattern of flashes every two minutes.

It was the first lighthouse in the Balearic Islands to use an incandescent petrol vapour Chance lamp (the one used at Punta de la Avançada was made by BBT and was externally heated) so that occasionally lighthouse keepers from other parts of the Islands such as Capdepera or Illa de l’Aire would have to come to spend a few days on the lighthouse in order to learn how to handle the new lamps, which ended up by being the most commonly used in the archipelago.

The installation remained unchanged until 1969 when the need to automate the lights on the smaller islands and retire personnel meant that  a major reform of the installation was carried out, changing the system to acetylene gas, replacing the lantern, renovating the tower as well as other building work. The considerable size and weight of the foot and base of the old English made Chance optic meant that the assistance of the US Navy was required for its transfer by helicopter to the Portopí lighthouse where is can still be seen today..

When the lighthouse was first opened three keepers were entrusted with its upkeep, later being reduced to two in the 1920s. In the 1960s staff comprised a technician and an auxiliary, working fortnightly shifts on the island before being replaced by staff residing in the Port d’Andratx and looking after the navigational aids in the harbour.