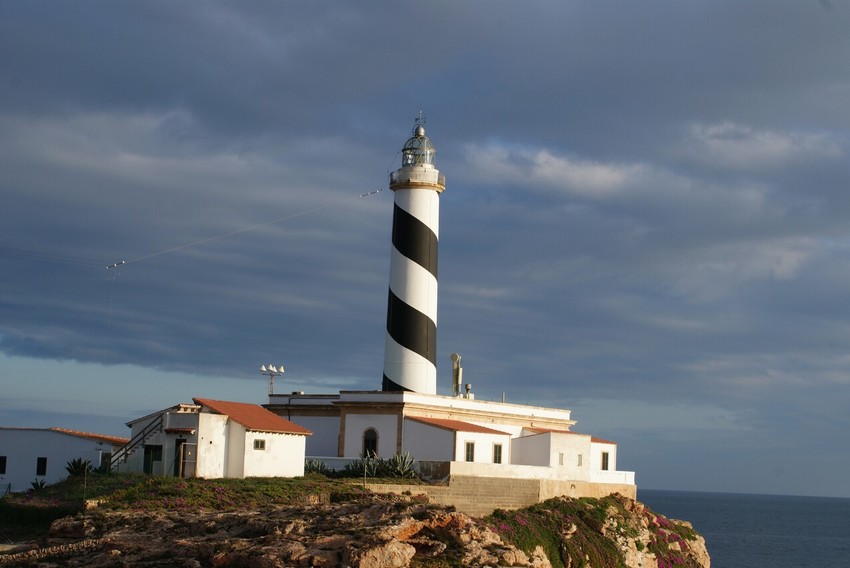 Was designed by Emili Pou. It was opened on July 31, 1860 as a 6th order lighthouse with a fixed light and constant level single wick lamps, although it actually received a 5th order lens.

1n 1919 rotating panels were installed producing two occultations every 10 seconds. The light was powered by an acetylene generator situated in a nearby blockhouse.

In 1950 the system broke down and was replaced by petrol-burning Maris or Aladdin lamps (both were used alternately).

In September 1970 a radio transmitter started operating (now GPS differential DGPS) and at the same time the keepers’ dwellings were enlarged.

Given the low height of the cliffs in this area, in high south-westerly winds the waves would often wash over the lighthouse buildings. Among the shipwrecks occurring in this area was the 1953 running aground at Punta del Mulá of the Ciudad de Palma, owned by Transmediterranea SA with no loss of life. When the lighthouse was initially opened it was equipped with a supply boat and a track was built for bring supplies and fuel up to the clifftop.

The ruins of the jetty and track can still be seen today. When an automatic beacon was placed at El Toro Island in 1926, the Cala Figuera lighthouse keepers were responsible for its upkeep. They were taken from a small jetty nearby to the rock where they would carry out their maintenance work. One of the most arduous and dangerous tasks was lifting the acetylene bottles using a clifftop boom; if the sea was not calm this could be very hazardous.