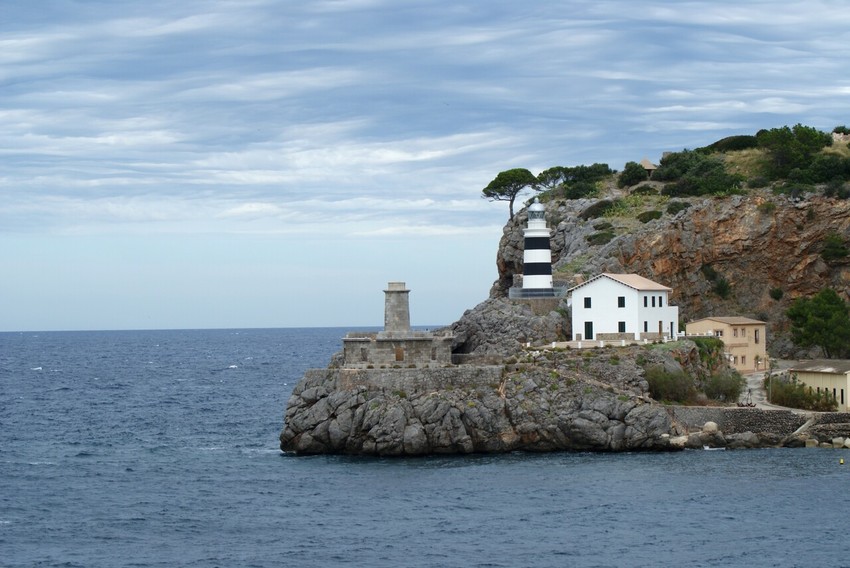 The first lighthouse was designed by Emili Pou. The project for a 6th order lighthouse was approved in 1862. It was opened on September 15, 1864. However when the site was being laid out the proximity of a blowhole caused some trepidation. North- westerly storms would force waves thirty metres up through the crater to crash down on the lighthouse. In 1865 strong winds and massive waves caused the building to tremble.  On days like these the lighthouse keeper considered the tower dangerous and would move his family to a nearby building. From 1923 the lighthouse was unmanned and nearby huts used by labourers in the construction of the lighthouse were turned into cottages for the lighthouse keepers and their families.  In 1928 a new lighthouse was planned further away from the blowhole and new dwellings were built but the new lighthouse did not enter service until the 30 of May 1945. This, and Cap Gros, were the first lighthouses to be powered by electricity in the Balearic Islands (in January 1918). However at first the electrical cabling left much to be desired and the back-up system consisting of a single wick petrol Maris lamp had to be turned on for a few hours almost every night. Text, photo and films from http://www.farsdebalears.org where you can find more information. Published with permission from the Port Authority of the Balearic Islands